These Three Families Found it When They Moved to Sault Ste. Marie

Sault Ste. Marie welcomes new residents with open arms and is giving them an Adventure Pass to help them enjoy the all-season outdoor life the region offers

When Kimmie Dozois and her husband, Derrick, told their two daughters they were moving from their farm near Windsor, Ont. to Sault Ste Marie, also known as The Soo, their reaction was not entirely surprising. Morgan and Meagan, who were 14 and 16 at the time, were vehemently opposed to the move.

“Our kids didn’t speak to us for days, they were so angry at us. We were uprooting them from everything they had ever known and taking them 12 hours away,” Kimmie says. The teenagers even went so far as to yank the For Sale sign out of the front yard.

Derrick works for Aecon Group Inc. and, when the construction company opened a new division in Sault Ste. Marie, he was asked to help get it off the ground. Derrick and Kimmie were thrilled with the idea because of their love for the outdoors, so they decided to take a leap of faith, which required Kimmie to quit her job of 18 years in automotive manufacturing.

“I needed to find something that would wow my kids, so I took them to Robertson Cliffs, just 20 minutes from The Soo,” Kimmie says. “I can’t believe how many people don’t know about it. It’s so amazing and it’s right here in our own backyard. I love that spot.”

She also took them to Bathtub Island at Katherine Cove. “Holy smokes, the white beaches! It’s something that Ontarians don’t know that we have, and we’re so lucky to have it.” 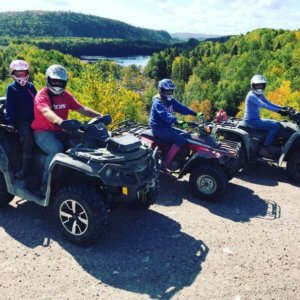 Kimmie Dozois and her husband, Derrick, with their daughters, Morgan and Meagan.

From their two-acre property in the city, they can head out into the bush with their four-wheelers “and go all the way to Hearst if you want to,” she says. In winter, they explored those same trails by snowmobile.

Her daughters now go dirt-biking with their friends, have part-time jobs after school and can’t wait to go to the beach this summer. Her oldest daughter, who just turned 17, told Kimmie recently: “Don’t tell Dad, but I really do love it here.” Kimmie was also able to fast-track a two-year program in real estate and got her licence on March 26.

The call of the outdoors also attracted Andre-Paul Baillergeon-Smith and his family to the area from St. Catharines. Andre-Paul, now a community legal worker serving as tenant duty council for Algoma, was looking for better work-life balance and better quality of life for his three children, who are all under the age of 10. So they moved to The Soo in December, 2019, when he accepted a one-year contract at the community legal clinic.

It was a risk, but also an opportunity to see if the family liked Sault Ste. Marie. “We fell in love with it right away. The people were incredibly friendly and within three months we ended up purchasing a home,” he says. They decided they would stay, even if his contract wasn’t renewed. Fortunately, his employer has since hired him on full-time.

Andre-Paul loves the lifestyle. “It’s seven minutes for me to go home for lunch and 15 minutes to go for a swim in Lake Superior,” he says. “It’s like a dream come true.”

They were also able to buy a detached home with multiple baths and bedrooms, something that would have been out of their price range in Southern Ontario.

His wife is Canadian, of Cambodian ethnicity. “My wife is a visible minority so we were a little concerned at first moving here, how the community would react,” he says. But they were surprised to discover that The Soo is culturally diverse, “so my wife felt incredibly comfortable from the very beginning.

“It really feels like a true Canadian city,” Andre-Paul says.

This is a sentiment shared by Lovleen Sharma Goyal and her husband, Harsh Goyal, who moved to Canada less than a year ago from New Delhi. The couple has no prior connection to The Soo; they discovered it while searching online for places to live in Ontario.

Friends encouraged them to move to Toronto or Brampton. “But we wanted to move to a smaller city close to nature,” Lovleen says. “We just fell in love with the place after looking at pictures.”

So, like Kimmie and Andre-Paul, they took a leap of faith and moved across the globe to their new home. 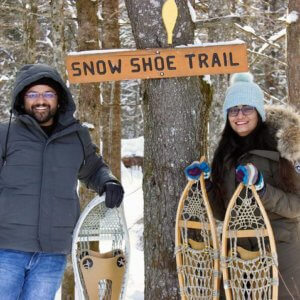 The couple has embraced life in The Soo. “Everyone had warned us that the winters are very bad in Canada, especially in Ontario,” Lovleen says. “We were so excited for the snow. For us, if this is what winters are like in Canada, we have no problems.”

They learned how to snowshoe and explored the ice caves on Lake Superior. In spring, they learned how to make maple syrup. Now that the weather has warmed up, they’re biking on forest trails and taking their new German Shepherd puppy, Hunter, to the beach. This summer they plan to try canoeing and kayaking, and next year they hope to buy a house with a backyard.

Harsh got a job as a security officer for a private company and Lovleen is working in digital media and communications at a start-up. But they also help students and newcomers build connections and learn about the area. They even started their own YouTube channel about Sault Ste. Marie, which now has 1,200 subscribers around the world.

“The people of Sault Ste. Marie are even more beautiful than the city itself. People back home don’t believe this place exists,” Lovleen says. “We’re happy we found this hidden gem.”

The Soo, as newcomers like Kimmie, Andre-Paul and the Goyals have found, is a true adventure town and a gateway to forests, mountains and wild rivers. A new multi-use mountain bike trail is being constructed from the Sault’s city limits to the surrounding Algoma region as part of the Algoma Trail Network, which will stretch a whopping 100 kilometres. The city is also installing two waterfront dock systems for entry-level kayakers and canoeists this summer.

To highlight its natural assets, the city is offering an Adventure Pass to new residents who move to work or permanently relocate in the Soo, such as medical professionals and engineers needed to meet local labour demands. Highlights of the Adventure Pass include hiking, cycling, climbing, canoeing, kayaking, fishing, skiing, snowshoeing, skating and more. The pass, valued at $500, can also be used toward season passes at Searchmont, Hiawatha Highlands/Stokely Creek and Waterfront Adventure Centre, as well as gift certificates to various outdoor retailers.