How do we recover?

It’s a question that’s top-of-mind for Registered Psychotherapist Bonnie J. Skinner. With all the campaigns rolled out over the past few years, we’ve witnessed an uptick in mental health awareness—but we still lack the tools to address what’s dragging us down.

“[Sault Ste. Marie] is gorgeous. We’re surrounded by water, surrounded by nature. There’s so much that’s here — in terms of the arts, culture, engagement in business. It’s a better pace; it’s been a great spot for our family.”

Using a blend of psychotherapy and life coaching, Skinner is part of a growing movement that is challenging how we view anxiety and depression. For the most part, she believes that the epidemic levels of anxiety and depression we’re reporting are not due to something wrong with our brains. Instead, those symptoms are a normal brain’s response to a society and an environment that is less than ideal. In short, we are depleted. So, instead of grimly resigning ourselves, she believes we can learn the tools to cultivate a healthy mindset—and be proactive in our own recovery.

Skinner is on a mission: To help the person that’s going to help the person that’s going to change the world. It may seem circuitous, but she’s excited about her impact. “Let’s say you work with one person,” she says. “When that client recovers and are feeling good and not struggling; then they go out and share those skills–whether its with their children, their partner; colleague—there’s a ripple effect.” 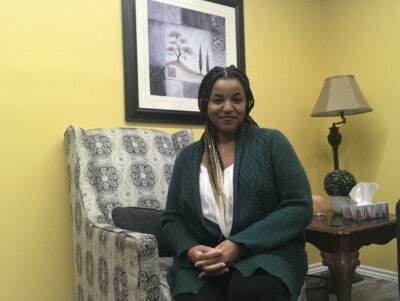 Skinner has long been fascinated with how our minds work. At 16, she was selected to go to science camp at Dalhousie University. “We got to go down to the neuroscience laboratory,” she remembers. “We dissected brains and learned about neuroscience. I was hooked. Instantly.”

After finishing her pre-med degree in Neuroscience, Skinner completed her Master’s in Counselling. Her first job out of school was working in community-based mental health, working with people experiencing the gamut of issues; from anxiety and depression, to trauma and domestic abuse. After a brief stint out west, Skinner headed back to Toronto to work in children’s mental health. But shortly after giving birth to her daughter, Skinner’s partner, Scott, was suddenly transferred to Sault Ste. Marie, ON. “We had gone up to the Sault before on vacations; [Scott] had friends up here,” she says. “I would always come back like, oh I wish we could move to the Sault. I just didn’t know if I would be able to find work here.”

To her surprise, she immediately landed a job in her field with Algoma Family Services. After a year, and getting multiple requests for service, she decided to open her own private practice.  “Starting out, I was a little concerned with being the outsider. But when I first started getting referrals, people reported that they wanted somebody they didn’t know; they wanted that degree of separation.” In Toronto, there was no lack of practitioners; but in a smaller city, she saw a real need for her services; both in counselling therapy and in business coaching. It was a space where she could truly make an impact. Plus; “it’s gorgeous. We’re surrounded by water, surrounded by nature. There’s so much that’s here — in terms of the arts, culture, engagement in business. It’s a better pace; it’s been a great spot for our family.”

Bonnie at home in the Sault

As an entrepreneur, “it’s been an adventure,” she says. “I’ve always been fanatical about entrepreneurship. My earliest experience—I bought these chickens when I was 12 and started selling eggs,” she laughs. While private practice can be isolating; Skinner stays connected with other practitioners, and checks in with herself frequently. “There are times that you’re tired. Or times where you’re like, what am I doing? Pick your why, write it down, keep it in front of you. It will fuel you. I always go back to: Just one more day of impact. It carries me through so much,” she says. “I don’t enjoy every aspect of running a business, but I enjoy the impact that my service can have.”

Most recently, Skinner has developed a new workshop series that re-frames how we view anxiety and depression; and introduces the tools to bring about real and lasting positive change. “The move now in the psychological world is really embracing neuropsychology, understanding our behaviors are driven by our brain,” she says. “Anxiety is your brain’s way of letting you know that something is not OK. It’s an alarm system. So when clients come in and say; I want to get rid of my anxiety…  well, anxiety is the reason we don’t play in traffic. We don’t want to eradicate anxiety; it’s necessary. So we want to understand; is the amount of anxiety I’m having congruent to what I’m experiencing? If it’s not, then what’s that about?” Skinner is shocked at how many people didn’t understand the connection between the brain and body; “we tell people; take care of yourself, but if we don’t tell them how, then what does that mean?”

Skinner acknowledges that in certain cases, there may be something wrong physiologically. “But predominantly, the epidemic that we’re seeing in anxiety and depression is because we’ve not been able to manage our self care and the environments that we’re in. The world’s not built so that we are happy and healthy. It’s built so we produce, produce, produce.”

Skinner will present Therapist Not Required: A New Look At Treating Anxiety and Depression in Sault Ste. Marie this November, and in Toronto early next year. It is her hope that with this series, she can pry open the conversation about how to better support those around us who are struggling to cope. It’s what keeps her going.

Posted in Immigrate, Stories from the Saulites